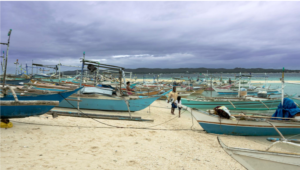 Shore of Gibitngil Island after fishing

Gibitingil Island, a small island near the northern tip of Cebu Province, is a 20-minute boat ride away from the town of Medellin. Because of its location, most residents rely on radios and fisherfolks who return from the mainland, for news.

In 2018, Chaya, Relyn and I went to Gibitingil Island to conduct fieldwork for Chaya’s doctoral research in York University. We were greeted by the three women leaders of the island upon our arrival–– Nanay Janice, Nanay Evangelyn, and Ate Roxanne. We arrived on a weekday so they were all busy tending to the needs of their families, organizing events, and attending community meetings. Chaya, Relyn and I held meetings with employees of the barangay (village) hall. We had to pay them a visit to coordinate our plans for the next few days on the island.

Every Sunday night, the women of the island, gather in front of their houses to drink liquor and share stories of their childhood, experiences during the week, or trivial matters that their neighbors would find amusing. I was lucky to have witnessed this weekly gathering as it revealed the humorous, more unguarded side of these women-leaders. It also provided a great deal of nuanced insight into my understanding of their coastal community. 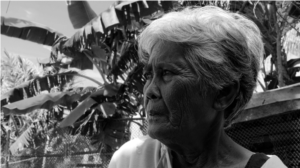 One of the women of Gibitngil Island

As I inched closer to their table, I was within earshot of most of their conversations. They all conversed in Bisaya, a language used in most provinces of Visayas and Mindanao. As I tried to make sense of their stories, using the little knowledge I had of Bisaya, a favorite topic amongst them is how their ex-mayor’s family built Fantastic Island, a (not-so fantastic) resort along one of their island’s shores. 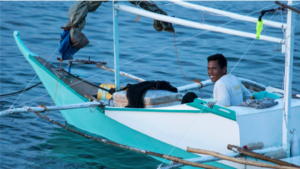 A fisherfolk heads out to sea 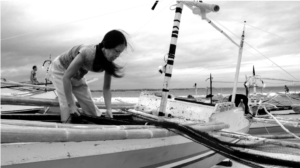 A fisherfolk untangles her net in preparation for the next day.

I remembered an earlier conversation with one of the fisherfolks, who mentioned that the ex-mayor ordered his men to bar and harass fisherfolks who would try to dock their boats on that side of the island— a great cause of anger and frustration amongst the fisherfolks who’ve lived on the island even before their ex-mayor was born. They said their ex-mayor used the island’s shores as his shooting range and the sounds of gunshots brought fear and anxiety to the townspeople. As I listened more to their conversation, I found out that their source of joy and peace finally came when they heard about their ex-mayor being arrested in 2017 because of the illegal possession of firearms and drugs. 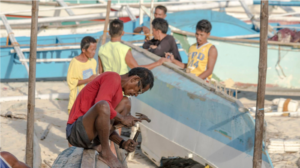 Fisherfolks fix their boats before the sun sets

That night, I felt a sense of envy for these women for having a solid sense of community, and for having anchored themselves—their culture and identity so strongly, in their land. I also remember how confused I felt because I desired to be shielded from the chaos of the city but at the same time, I felt contempt over the injustices the residents of Gibitngil experienced— who’re dependent on one another for survival yet barely receiving assistance from the government. As I tried to fall asleep that night, I dreaded the feeling of returning to the city because I knew that all these thoughts and strong emotions will soon be obscured by other thoughts and ideas from the city.

A week ago, memories of my stay in the island came flashing back when I opened my social media. I found the ex-mayor’s face and name in various online news sources. He was shot dead by unidentified gunmen in a private hospital where he was in hospital arrest. Rumors point to the possibility that this was one of the many operations of President Duterte’s ongoing war on drugs—which has now moved most of its operations in Cebu. As I read the news, I remembered the night I shared with the women of Gibitngil, a place that, in my mind, felt distant from chaos and violence. With a small solar bulb as their only source of illumination, the women of Gibitngil bore their souls, laughed, and teased each other before they began a new work week.